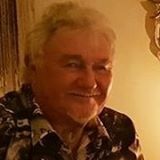 Harry, who left school at 15, developed a love of music and poetry while at sea with the Royal Navy. He was soon expressing his passion for Cornwall through his Folk music, reflecting not only the grief and hardship left by the decline of mining, but also the resilience of Cornish people.

Harry says, "If we want a better future, especially here in Cornwall, then vote for Andrew George tomorrow."

Who is Harry Glasson ? - Harry Glasson was born in 1951 at Cowscramp Clowance near Praze an Beeble, Cornwall. Harry joined the Merchant Navy the day after his 16th birthday and started writing poems and Cornish dialect verse whilst at sea. This quickly progressed to putting the words to music on a guitar that Harry built in the school woodwork department. Harry gigged around Cornwall for over 30 years and toured the USA several times between 1998 and 2008, building up a legion of fans from all over the world. In July 2009, Harry was diagnosed with Cancer of the vocal chords, which subsequently resulted in his vocal chords being removed in September 2009. Harry will still occasionally get up and play a few songs on his guitar and sing with the aid of a valve that is inserted into a hole in his neck. Harry can now be found out in the countryside, often near water partaking in his new love Photography https://www.facebook.com/harry.glasson

Some of Harry's songs are sung throughout Cornwall by many Cornish Choirs and other artists, the most popular being the anthemic "Cornwall My Home".

From The Songs of Harry Glasson Album